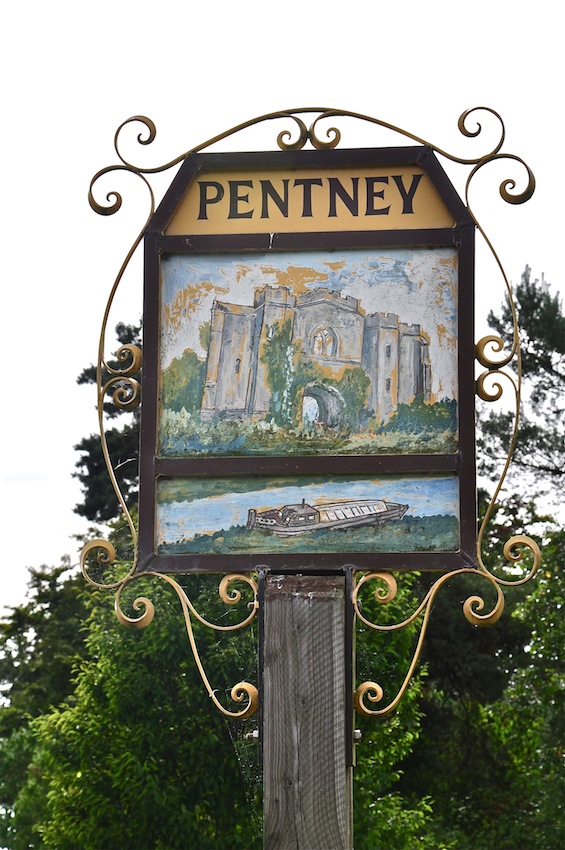 This is really a story about…… you should never put off what you want to do until another time, or something like that, because it will be too late.  Which is what happened to me about the building on the village sign in Pentney, no it didn’t fall down, it was restored.  But I so wanted to see Pentney Abbey Gatehouse in Norfolk, in its unrestored state, and I very nearly did.  It is privately owned, and very difficult to find, also they didn’t want people turning up just to take photos.  As there was, and still is, a caravan park on the site, the plan was to book the caravan we had then, for a night so I could explore the ruins.  Of course it was always something we would do later….. but now it is no longer a ruin, but a beautifully restored building, but I so wished we had booked.

This building, was the Gatehouse of what is locally known as Pentney Abbey, an Augustinian Priory for nearly 500 years, from 1075, in the time of William of Normandy, to its Suppression by King Henry VIII in 1534. The Priory went in to decline in the 15th century, and a lot of the stone was used for Abbey Farm and many buildings in the village.  It is also said that the soldiers of Oliver Cromwell, during the Civil War, brought the Priory really to a ruin. They came up the river Nar in flat bottomed boats and used the buildings for target practice!   There is also a story that the gatehouse was too far away for them to destroy, and that is why it was left standing.  You can only imagine what splendour the rest of the buildings were, when you consider this was only the gatehouse.

I found a photo by Simon Knox, who luckily explored the building before restoration.  The owners with the help of English Heritage have carried out a wonderful job, as shown by a photo I found in a newspaper, and now the gatehouse will stand for many centuries to come, you can even get married there.

The village does have a lovely part Norman Church, St Mary Magdalene, so quite a lot of history in this now very quiet charming village, which once had a mighty Priory as a near neighbour.