This is the last religious site, Soroby Graveyard, that we came across on the Isle Tiree, off the west coast of Scotland in May 2016.  There are many more sites, but those sites have hardly any remains left and it just makes it a bit difficult to post about a mark in a field……..I need at least a few rocks to get my imagination going.  Just want to point out, the whole graveyard was covered in primroses, they made a beautiful picture.

A little bit of history about the Parish Church at Soroby……The only visible surface-remains comprise a number of architectural fragments which survive in re-use as burial-markers and are distributed mainly in the N half of the cemetery and some may be from the 13th century. The church served the parish of the west half of Tiree until the union of Coll and Tiree parishes in 1618. The church is recorded in the 13th century, and it seems to have remained in use until at least the late 17th century.
It has been suggested that the site could possibly be identified as that of the Columban monastery of Campus Lunge, and the existence of the Early Christian carved stones here do suggest that this was an early and important ecclesiastical site. This may have had some connection with the probable Early Christian monastic site at St Patrick’s Chapel, 5km away……..we didn’t have time to look for St Patrick’s, but maybe next time we visit. 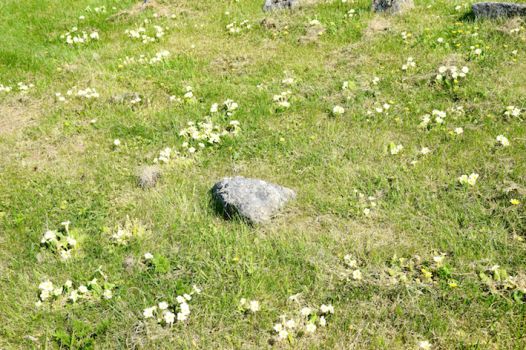 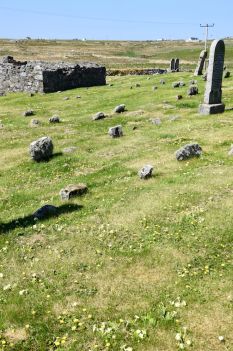